Giant Sequoia are the most massive individual trees in the world. They grow to an average height of 164–279 feet with trunk diameters ranging from 20–26 feet. Record trees have been measured at 311 feet tall. The specimen known to have the greatest diameter at breast height is the General Grant tree at 28.9 feet.

The oldest known giant sequoia is approximately 3,200 years old based on dendrochronology. Giant sequoias are among the oldest living organisms on Earth. Giant sequoia bark is fibrous, furrowed, and may be 3 feet thick at the base of the columnar trunk. The sap contains tannic acid, which provides significant protection from fire damage. The leaves are evergreen, awl-shaped and arranged spirally on the shoots.

The giant sequoia regenerates by seed. The seed cones are 1–3 inches long and mature in 18–20 months, though they typically remain green and closed for as long as 20 years. Each cone has 30–50 spirally arranged scales, with several seeds on each scale, giving an average of 230 seeds per cone. Seeds are dark brown, yellow-brown wing along each side. Some seeds shed when the cone scales shrink during hot weather in late summer, but most are liberated by insect damage or when the cone dries from the heat of fire. Young trees start to bear cones after 12 years. 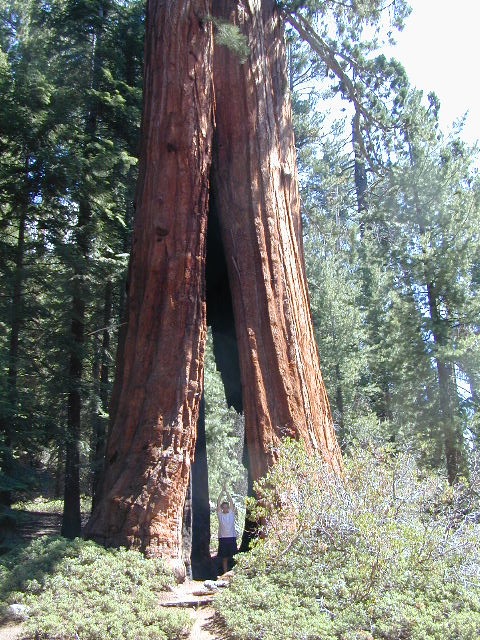